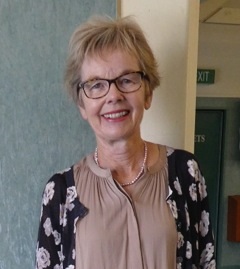 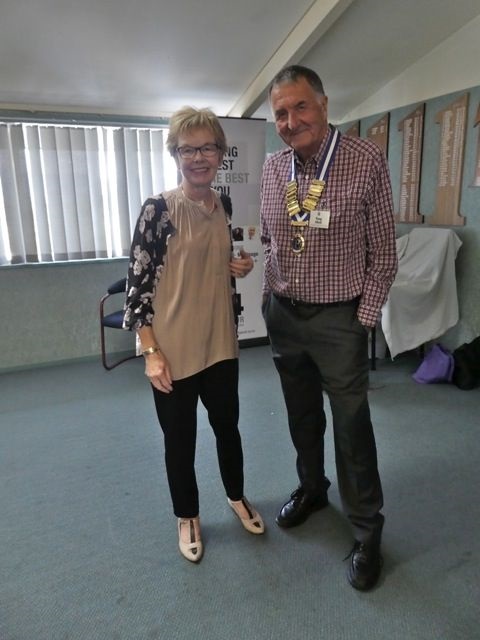 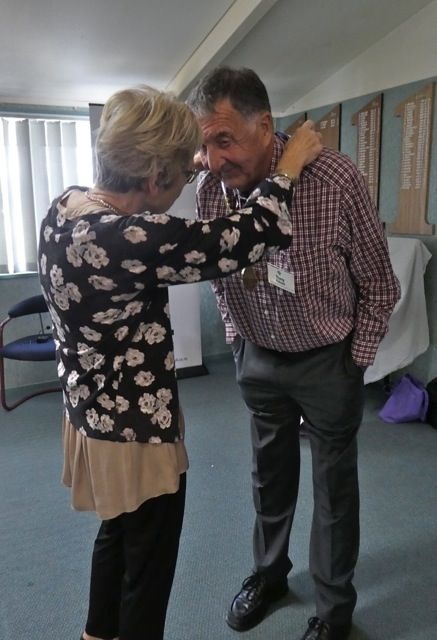 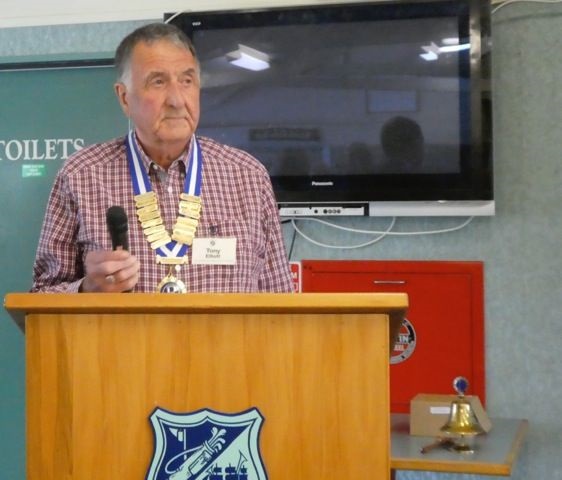 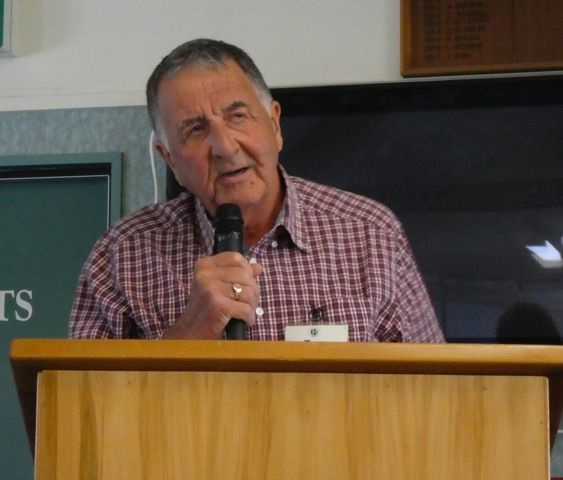 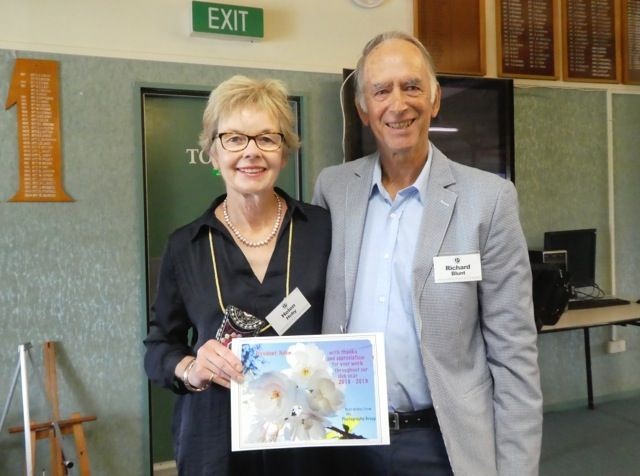 The Camera Club makes its presentation. Not unnaturally it's a photo!! 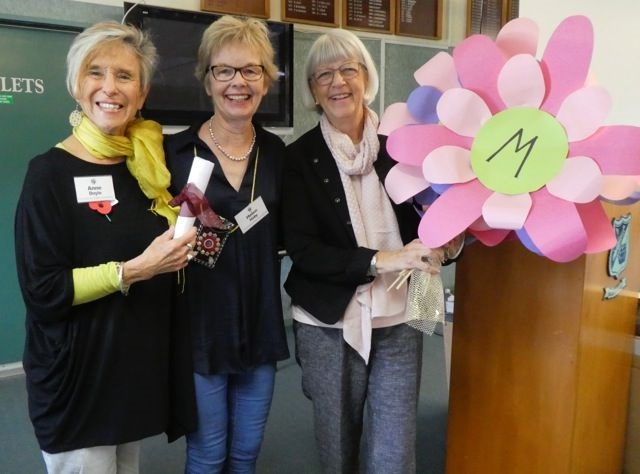 The Mah Jongers say thanks 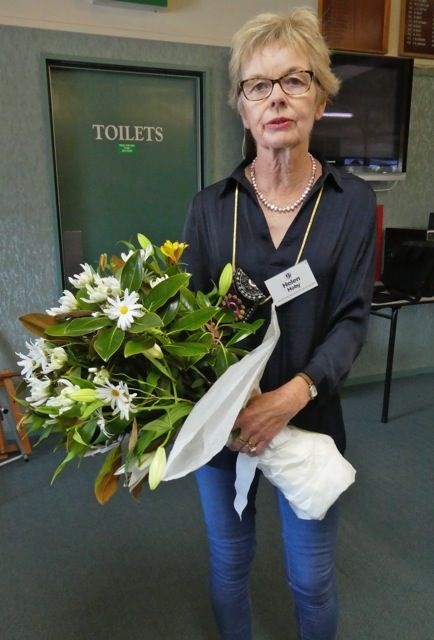 Saying it with flowers - pity about the background! 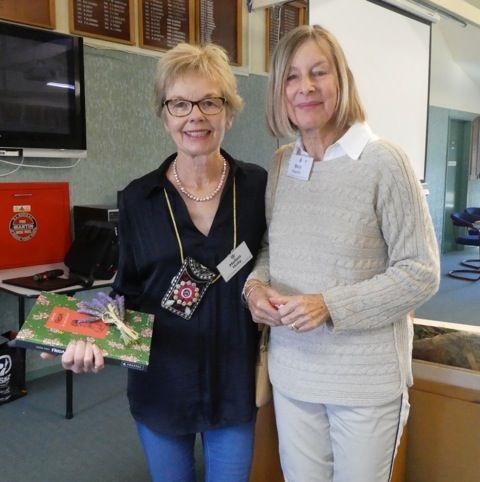 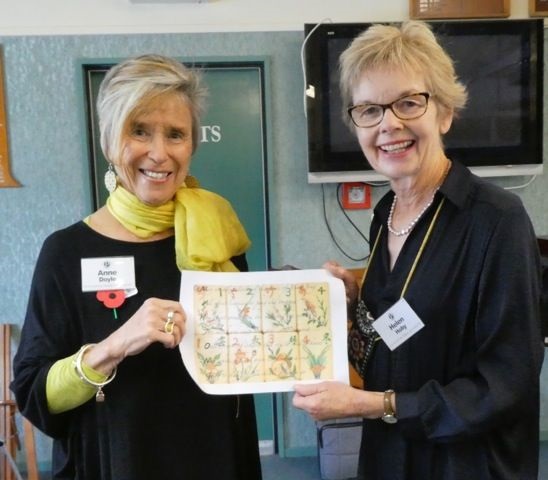 This may be a Mah Jong crib sheet

John M excelled himself with his poetry reading this month. We have come to expect a poem from John to start each meeting, but on his retirement from office, he topped them all.

Helen then ran the General Meeting which for the main part saw the different groups saying farewell to John in a way unique to their group. Among his gifts were a psychedelic pink lycra T-shirt, a Chinese Mandarin’s hat complete with pigtail (that one a loan not a gift), a multi purpose tea cosy/hat again in psychedelic colours, a first edition novel by our own Sally A, a scroll with an undisclosed message tied with ribbon from the golfers. He was serenaded in turn by the Cyclists and the Mahjong Ladies.

Robin H presented a slide show of photos, Carol L, a poet, read one of her own poems, Sally A narrated a presidential scene which by her own admission did not allow the truth get in the way of a good story. Bill U, resplendent in pink lycra began a tale which metamorphosed into a biking audio visual show. Jerry G spoke to a slide show on 4Wheel Drive trips including Eric S masterminding the changing of a tyre on Harry B’s Range Rover, a heavy job. Tony did a wrap up event on the silver screen, himself as producer and director, starring an Italian maid with her rendition of “My Latrine”.   It was a memorable windup to another great year.

Completely overshadowing this year's AGM was the Mosque Massacre in Christchurch on Friday 15 March 2019.   Our leaders decided that there would be no "Annual Roasting" of the ex President after morning tea.  We started with a moment's silence and finshed with a heartfelt message from Tony Elliott the Club's new President describing his and Judy's journey to New Zaaland and the love and support they had received in this country.  Then followed the inspirational singing of the National Anthem.  These were amazingly emotional and moving moments befitting the times in which we were were living.   Congratulations to all those responsible for the event.  The AGM effectively took back stage, with the highlight being Helen Hoby's poem which is repeated below.

So the reality was that we did not get a decent chance to express our appreciation to Helen H for her stunning leadership, full of humour and wisdom, and above all, sincerity and empathy.  In retrospect it was a great year gently led and inspired by her example.

A Poem  for You All

It seems my time as your leader is nearing an end

The year has been great to gain so many friends ,

As  usual we've lunched, some have travelled afar

To see the gannets on mass in lovely Hawkes Bay .

You've cycled in Tasman,  in Taupo and Martinborough ,

Some stayed in a Chateau , not quite like the French

“Did not visit Rotorua for fear of the stench “

We've walked in the Brook,  Cable Bay and Wangapeka

The Golfers have golfed, the Bookies have read ,

I still need to do both , I have plans ahead .

Our Photographers take pictures worthy of a book

The Mahjong girls play with gusto,  I did take a look .

The Crafters keep crafting,  they never will stop ,

The scribes keep on writing but what is the plot ?

We celebrated with Royalty “the Wedding “ in May

And dined  “English Style” for our Fun Christmas Day

Chris Knight for the trips , my sincere thanks go to you All .

And now I really will bid you farewell  ,

The next Chapter awaits , and that TONY can tell .

The Camera Club makes its presentation. Not unnaturally it's a photo!!

The Mah Jongers say thanks

Saying it with flowers - pity about the background!

This may be a Mah Jong crib sheet